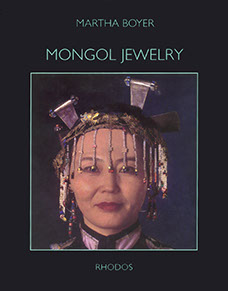 The Jewelry of the Mongols, those fascinating pastoralists of the vast plains of Central Asia, is as strikingly beautiful as it is historically interesting.

In this book Dr. phil. Martha Boyer offers an encompassing treatise of the forms and styles of traditional Mongolian Jewelry, based on a thorough analysis of an exquisite collection, from among a dozen Mongolian tribes, now in the possession of the National Museum of Denmark. She deals in depth with the origin and transformation of motifs and ornamental styles, in particular of the beautiful headdresses and hair ornaments of the women. It is argued that Mongolian silverwork shows artistic elements indebted not only to cultures of India, Tibet, and China but also to ancient Scythian art and once famous Central Asian metalwork. The book is a treasure for anyone interested in the arts and cultures of Central Asia.

Published in 1995 in the series The Carlsberg Foundation's Nomad Research Project. Hardcover with dust jacket. 276 pages. 200 illustrations – 90 in colour.

Dr. phil. Martha Boyer (1911-1995) was the Curator of the East Asian collections at the National Museum of Denmark from 1955. She became Senior Lecturer in East Asian Studies at the University of Copenhagen in 1966, where she taught Chinese Art and Culture from 1968, until she retired from the university in 1977. Her major publications, apart from Mongol Jewelry, include her doctoral thesis on Japanese Export Laquers from the Seventeenth Century in the National Museum of Denmark and a Catalogue of Japanese Laquers for the Walters Art Gallery, Baltimore. Martha Boyer wrote several more popular books on Japanese culture.