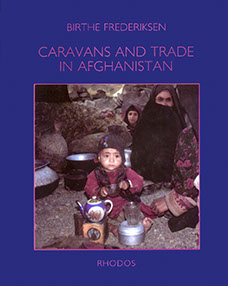 CARAVANS AND TRADE IN AFGHANISTAN

- The changing life of the nomadic Hazarbuz

The Hazarbuz is a sub-group of the Pashtun Mohmand engaged in caravan trading in East Afghanistan along the route to Turkestan which for centuries has been linked to the Silk Road, the age-old connection between the Orient and the Occident.

The book traces the socio-economic and political transformation of Hazarbuz community over the past century. It describes the successive changes from a pastoral way of life to a settled existence in bazaars in Afghanistan and lately in crowded refugee camps in Pakistan, where many Hazarbuz went in exile after 1979. The analysis is based on the author’s field data and the scanty literary sources.

The work discusses the historical factors which partly encouraged and partly forced the nomads to engage in transport activities with their camels and, from the 1920s, to turn to trade. While the Hazarbuz exported a variety of products from Afghanistan to the Indus lowland, their main source of income has come from the import and sale of tea in the northern regions of Afghanistan.

The transformation of Hazarbuz pastoral economy is analyzed within the wider context of cultural and political change and with particular attention to kinship ideologies, social organization, and notions of solidarity.

Contents: From nomadism to tea trading – Culture and society – Pastoral nomadism and caravaneering in the early twentieth century – Trade and settlement – Hazarbuz as merchants in the bazaar – Social cohesion and economic adaptation – Exile in Pakistan – Conclusions - Appendix: Fieldwork among the Hazarbuz – Glossary – Bibliography - Index.

This book is tightly connected with the works of Gorm Pedersen (Afghan Nomads in Transition: A Century of Change Among the Zala Khân Khêl, 1994) and Klaus Ferdinand (Afghan Nomads. Caravans, conflicts and trade in Afghanistan and British India, 2006). See also: Asta Olesen: Afghan Craftsmen. The Cultures of Three Itinerant Communities, 1994. All published in the series The Carlsberg Foundation’s Nomad Research Project.

Birthe Frederiksen is a social anthropologist. She did fieldwork among pastoral nomads and bazaar merchants in Afghanistan in 1975 and resumed her work among the very same people in the refugee camps in Pakistan in 1988.