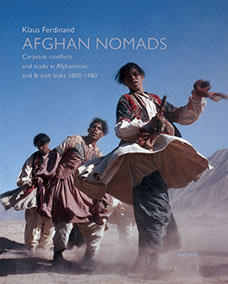 - Caravans, conflicts, and trade in Afghanistan and British India 1800-1980

The book’s perspective is both historical and contemporary ethnographic, with the intention of describing and explaining development trends that Afghan pastoral nomads have been through in the period 1800-1980. The study of Afghan nomads as part of nomad research in general is the first issue covered in Part I. Then we look at Pashtun pastoral forms of life, as they exist in the East Afghan migrational area, which serves as a comparison for the following description and analysis of the transformation processes in which nomads were part in British India and Afghanistan in the 19th and 20th centuries.

The traditional forms of life and society of the Hazara are presented in Part II, including their isolation in the 19th century, forming the background to their encounter with the Pashtun nomads after Amir Abdur Rahman Khan (1880-1901) had conquered their territory. This encounter developed through neighbourship trade and trade caravaneering activities as well as state interventions leading to the economic dominance of the Pashtun nomads and the ‘internal colonisation’ of the Hazara area. There were no changes to this situation until the popular uprising against the revolutionary rule in 1978, following which the Pashtun nomads were kept out for almost two decades.

Part III concerns the increased caravaneering activities of the Pashtun nomads starting with the tribal caravans between the Indus area and East Afghanistan from around 1800 and the later successive establishment of temporary nomadic bazaars in the Hazara area and among the Aimaq and western Pashtun nomads, who are presented in further detail. The establishment, development, decline, and demise of the bazaars after government interventions are given specific attention, as is the trade with surplus animals as well as the wholesale and retail trade of Pakistani and Afghan goods.

Part IV describes the large nomad bazaars: the Kerman bazaar in western Hazarajat, Central Afghanistan, where it could be reached from all parts of the country, and the new bazaars in the Aimaq area: the Abul bazaar, the Gomao bazaar, the Charas bazaar, the livestock market and the urban bazaar of Chaghcharan (Kasi), the Taywara bazaar and the Shahrak bazaar. Two smaller bazaars, Shurwa and Chashma-I Sakina, are also described here.

Part V looks at the situation among the Pashtun nomads in British India until the partition in 1947 and how these people adapted to changed life conditions, especially through cloth-hawking and money-lending in marginalized areas, exemplifying how Pashtun nomads used their flexibility to exploit opportunities in the surrounding society.

Finally, Part VI offers a summary of the relationship between the nomads and the state, first in British India/Pakistan and then in Afghanistan. This is followed by a general summary of the described development processes in which the nomads were the main agents. An epilogue deals with the situation of the nomads after 1980, until the fall of the Taliban government in 2001.

This book is tightly connected with the works of Gorm Pedersen (Afghan Nomads in Transition: A Century of Change Among the Zala Khân Khêl, 1994) and Birthe Frederiksen (Caravans and Trade in Afghanistan: The Changing Life of the Nomadic Hazarbuz, 1995). See also: Asta Olesen: Afghan Craftsmen. The Cultures of Three Itinerant Communities. All published in the series The Carlsberg Foundation’s Nomad Research Project.

Klaus Ferdinand (1926-2005) was associate Professor of Anthropology at Aarhus University and Head of the Ethnographis Department at the Moesgaard Museum. He carried out fieldwork in East and Central Afghanistan during extended periods of time between 1953 and 1983. His research interests were Aimaq and Pashtun pastoralism and caravan trading, as well as Hazara culture.